Inorganic Allantoin (as well as a set of other artificial components – Mucin), for example, cannot be used in natural organic cosmetics or biologically active food supplements. Some protocols completely prohibit the use of artificial allantoin in various products and industries.

Introduced mainly by Chinese markets, artificial mucin usually does not have a Safety Data Sheet, Research and Origin Certificates. The main buyers of inexpensive artificial Mucin are mainly small cosmetics manufacturers whose products are not associated with snail cosmetics and are in the low price segment. 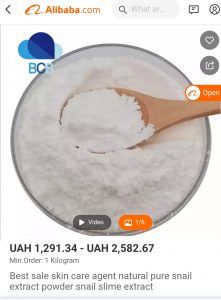 Manufacturers of prestigious brands of snail cosmetics and nutritional supplements choose natural ingredients – snail slime obtained from live snails. The disadvantage of natural snail mucus is the natural balance of components (Allantoin, Glycolic and Hyaluronic acids) – their indicator is natural, it cannot be increased, as in an artificial product, and of course the high cost of a natural product. The advantage is their natural origin and the natural balance of all substances.

Natural snail mucus (including lyophilized mucus) is a living product, it has microbiology and inhibition processes occurring even in a sterilized product. 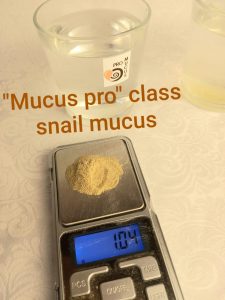 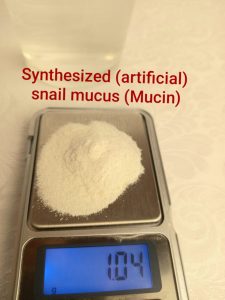 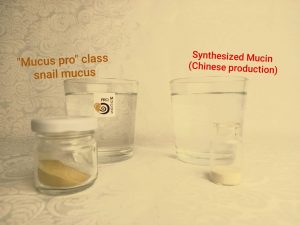 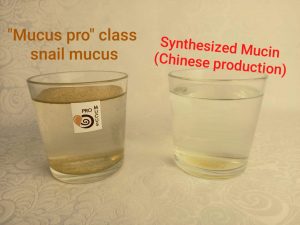 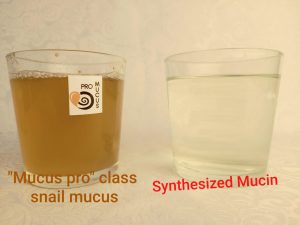 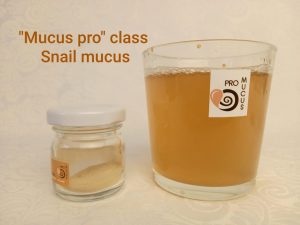 Natural snail mucus, like the snail itself, is a strongly alkaline product, the acidity of the mucus (pH value) is more than 7.
Snail slime cannot be acidic! 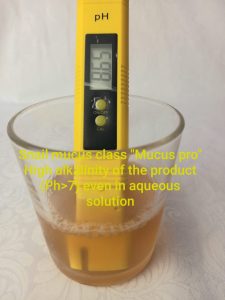 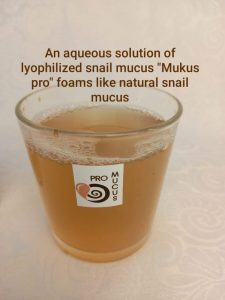 Small doses of snail mucus in finished cosmetic products do not affect the color and transparency of cosmetics.
If the lyophilized powder of Helix aspersa mucus of the “Mucus pro” class is diluted in water at a concentration of an aqueous solution of 1:100, then the natural concentration of mucus of Helix Aspersa Muller snails will be obtained. 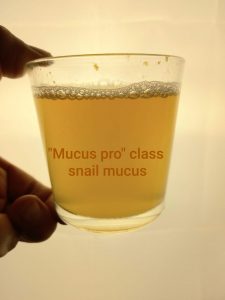 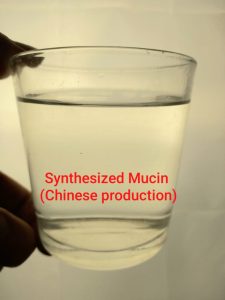 If such an aqueous solution is applied with a cotton pad or sprayed onto clean skin of the face or décolleté, then the lifting effect and nourishing effect can be felt in a few minutes. So you can check the quality of natural snail mucus of the “Mucus pro” class. 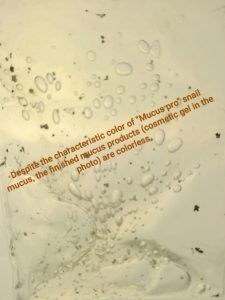 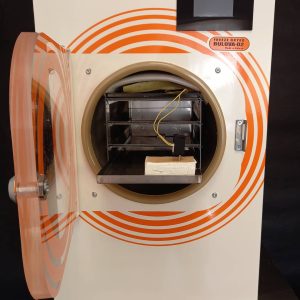 Dry powder of natural snail mucus is a lyophilized product, dried in vacuum at negative (-20C) temperatures, raw snail mucus. Freeze drying ensures the preservation of all substances in the product and even the cellular structure. This is a one-component product – it contains only snail mucus, the purity of the finished product: 100%. Freeze-drying is the most expensive type of drying products, it is used for especially valuable products and substances. The shelf life of freeze-dried products can reach 50 years. Shelf life of lyophilized snail mucus “Mucus pro” is 10 years.

The high cost of lyophilized snail mucus is also due to the large shrinkage of the product: for example, only 0,8% dry matter can be obtained from Helix aspersa Muller snail mucus,
and up to 4% dry matter from Achatina Fulica mucus after freeze-drying.