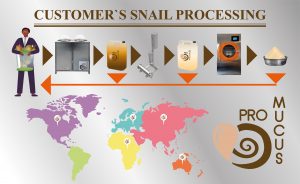 “Mucus pro” snail mucus is of high quality, produced without the use of water, without additives, without chemicals and without acids, has a purity of 100% and has high ratings in the shellfish mucus market.

2. Also, by purchasing the “Mucus pro Franchise” – you will be able to provide services for the production of mucus for other clients from their snail (Outsourcing) on behalf of the “Mucus pro” company.

You can become a participant of the project “MUCUS PRO: Outsourcing”: processing of slime from a client’s snail.

The company “Bulova” invites producers of snail mucus for cooperation – for the secretion and processing of mucus for other clients from their snails (outsourcing).

You can become a participant of the project “MUCUS PRO OUTSOURCING”: processing of snail mucus from a customer’s snail.

By selling the “Mucus pro OUTSOURCING” service, you will pay off the Mucus pro equipment even faster.

Farmers (your clients) from different countries often ask us to make slime from our own snail (outsourcing). Such clients can also be from your country. We will direct them to you.

Pure snail mucus (100%), high density, no water, no reagents, with a high content of mucopolysaccharides of whole proteins and acids.

Now you will be able to provide them with the service of processing raw materials (outsourcing) using Mucus pro technology.

In 2021, a one-time fee will be 1 euro (lump-sum payment)*, royalties – 1% of turnover. The franchisee has no other payments and obligations. The owners of a set of equipment for the extraction and processing of mucus Mucus pro use the order search system “MUCUS PRO: OUTSOURCING”: they are placed free of charge on the Mucus pro websites, produce products under the Mucus pro trademark. The franchisee helps the franchisor to control the quality of the products.

The cost of the minimum set of required Mucus pro equipment is 5700 euros if you do not already have one.

* From 2022, the cost of the Franchise (lump-sum fee) will be from 1000 Euros, the Mucus pro equipment will go out of free sale – it will be sold only with the Franchise.

Together – we help make snail slime production even more affordable in the world! Snail slime is easy!

This is a turnkey business for the production and processing of shellfish slime!