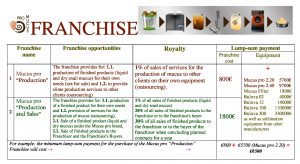 Already in 2022, Mucus pro equipment will be part of a one-time contribution to the Mucus pro franchise, and it will not be possible to purchase it separately without purchasing a franchise.

A little about the franchise …

And the Franchise itself is an object of a franchise agreement, a set of rights to use a brand, technology, equipment, business model of a franchisor, as well as other benefits necessary for creating and running a business. A franchise can be business methods, a trademark, a technology with mutual obligations between the transmitting (franchisor) and receiving (franchisee) parties, provided for a fee and executed in accordance with the law on the protection of intellectual property.

A lump-sum installment is a one-time payment that is transferred from the Franchisee to the Franchisor, including 1) the cost of the Franchise itself (the Right to Use), 2) the necessary equipment and technology.

Royalty is a type of license fees, periodic monetary compensation, for the use of patents, copyrights, franchises.

Paid as a percentage of the value of goods and services sold.

For example: for Franchise # 1 Mucus pro “Production”  – royalty is the percentage of sales of mucus production services to other clients (% in outsourcing).

And for the Franchise  #2 Mucus pro “Production and Sales”, a percentage of the sale of finished products, which the franchisee sells under the franchisor’s trademark, is added to the royalty.

Moreover, this percentage increases if the franchisor turns out to be a buyer of finished products for the franchisee (finds him a buyer and sells the goods).

Our company will offer you two types of franchises: 1) for the production of snail slime for yourself or others (outsourcing) and 2) for sales under the Mucus pro trademark.

The cost of the franchise No. 1 of Mucus pro “Production” is 800 euros, including 1% royalty;

Moreover, now the franchisor can sell the finished products of their franchisees and offer them to end customers and consumers.

And in 2022, Mucus pro will gradually phase out its own production of snail slime, in fact: it will sell slime to its franchisees for a good percentage (royalties).

The finished products you made under the Mucus pro brand are available in INCI and CAS.

Why: the snail mucus produced using the equipment and technology of Mucus pro is unique: it is produced without the use of water, acids and chemicals – it is pure mucus, the lowest cost of snail mucus production in the world and the lowest price with high quality, the highest Allantoin content, glycolic and hyaluronic acids.

Mucus pro just wants to consolidate the quality of its products on the market, exclude the production of snail slime of other brands on its equipment.

In fact, Mucus pro limited the ability of Mucus pro equipment owners to sell finished products – snail mucus of the Mucus pro class under other names.

Cons for the buyer:

In fact, the cost of the equipment will rise and a new surcharge will arise – the franchise royalties.

Mucus Pro equipment cannot be freely purchased on the market, only together with a franchise.

Pros for the buyer:

Now the franchisor will help sell the finished product (snail slime) from its franchisees for a fee (royalty), and the system for selling snail slime will be carried out from different continents from different types of snails – this will be a new type of world trade in high-quality snail slime.

Today there are many final consumers of snail mucus, mainly cosmetics manufacturers, they use cheap “snail mucus” of unknown origin, mainly exported from East Asia, they usually do not test the product for allantoin, glycolic and hyaluronic acids, but buy a colorless powder  doesn’t even look like natural snail slime.

That is, there is nothing good and useful in such cosmetics.

And the natural mucus of the snail “Mucus pro” is easy to check without devices: apply liquid mucus (if you have a lyophilized powder, dilute it 1: 100 with clean water, this is a natural concentration of snail mucus) on the face with a swab or spray,  the lifting effect will be in 2-3 minutes, and the next day the skin will become smooth.  Fake, colorless snail slime will not have the same effect or have the same properties.

We have proved to the whole world: Snail slime is easy!

That you can produce quality, but inexpensive snail slime.

And push out cheap fakes from the market