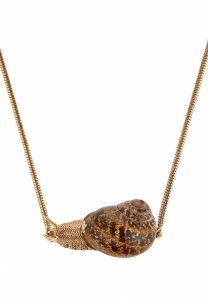 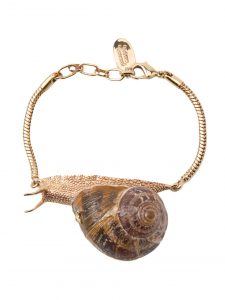 An interesting collection of snails from Vivienne Westwood, Nymphs Spring / Summer 2002. This English snail bracelet, made of gold and real snail shell, perfectly recreates the atmosphere of a garden after a summer rain and only emphasizes the high cost of the snail industry. After all, some snail products are more expensive than gold! 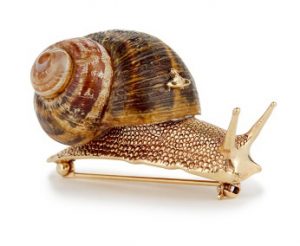 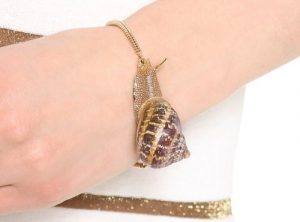 In 2022, Mucus pro will present several of these works of art to its customers and franchisees as part of the 2022 shopping lottery. In addition, the shells of the jewelry will be from the Mediterranean snail Helix aspersa Muller, grown on the Bulova company snail farms. Follow us on Facebook: https://www.facebook.com/MucusPro 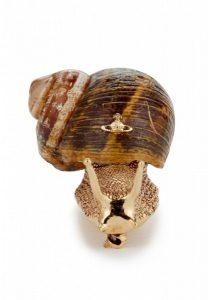 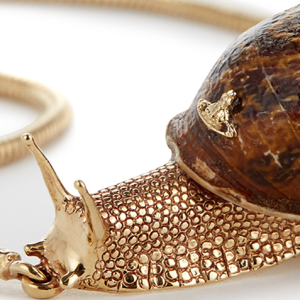 Westwood came to public notice when she made clothes for Malcolm McLaren’s boutique in the King’s Road, which became known as SEX. Their ability to synthesise clothing and music shaped the 1970s UK punk scene which was dominated by McLaren’s band, the Sex Pistols. She viewed punk as a way of “seeing if one could put a spoke in the system”. 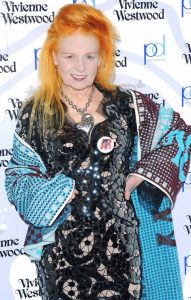 Westwood owns stores in London and eventually expanded across the United Kingdom and around the world, selling an increasingly diverse range of merchandise, some of which promoted her many political goals, such as the Campaign for Nuclear Disarmament, Climate Change and Civil Rights Groups. …